Faction - after character creation, the player must choose which of two factions to join. From the moment the choice was made, all players from this faction become allies for him in the fight against the opposite side. It is worth knowing that it is impossible to harm allies (except in rare cases). There is also a restriction on inviting characters from an enemy faction to a group, clan or alliance.

Title Indicator - all characters have a progress indicator in their title. Various factors affect the growth of its value, but it mainly depends on the items equipped and the level of their enchanting. For characters from the enemy faction, it also means the amount of adena that can be obtained for killing them.

Assist System - for help in killing an enemy character, 40% of the reward indicated in his title is credited, or 60% if a last hit was struck.

Active Territories - not all territories in the game world are active, but only those in which objects significant for the players were located. Such as monsters, outposts, villages or fortresses. In such places, battles between factions are concentrated. Active locations change every 60 minutes.

Outposts - guarded structures with outpost flag that can be teleported to or respawned near them. An enemy outpost cannot be captured, but can be temporarily destroyed. The recovery time of the outpost is 15 minutes.

Villages - heavily sguarded tructures that attackers will receive a reward for capturing them. The amount of reward depends on the duration of the holding of the village by the enemy faction. Players from the faction that controls the village will be able to move to it, and if a character dies in the vicinity of the village, he will be able to respawned in it. Typically, villages are located in areas between faction outposts.

Fortresses - they have a lot in common with the village, they are also captureable structures with growing rewards for capturing. A clan from the faction that controls the fortress can become its owner. As long as a clan owns a fortress, clan reputation points are awarded to it.
NPC in the fortress::

o start capturing the fort, you need to destroy all the "Control Crystal" in it. After their destruction, the "Nephilim Commander" will appear on the roof of the central building, which must be killed. After the commander was killed, the "Conqueror's Altar" will appear in the room of the central building, which requires the use of the "Seal of Ruler" skill to complete the capture.
Notes:

Epic Boss Battle - everyone can participate in this event without restrictions. At the beginning of the event, all participants from both factions are transferred to a temporary location to fight for control of the NPC "Epic Gatekeeper", through which you can make a teleport to the lair to the Epic Boss.
Event time: Tues, Fri, Sun at 21:00 (GMT +3). 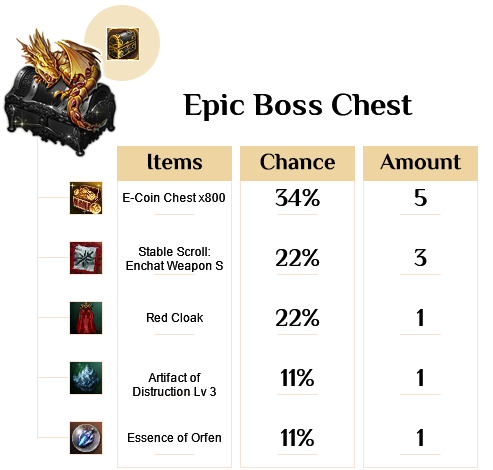 Castle Siege - some of the basic rules for this event have been changed. Now the siege is started everyday, Any interested player can register, regardless of whether he is a member of a clan or not.. To do this, you need to register with the NPC "Siege Teleporter", which will appear shortly before the start of the castle siege. After registration ends, all participants from the two factions will be moved to the siege territory. One faction will act as the besiegers of the castle, while the other will act as the defenders of it. These roles alternate with each subsequent siege. The faction that owns the castle at the end of the siege is considered the winner.

To capture the castle, it is enough to use the "Seal of Ruler" skill on the "Holy Artifact", which is located in its classic place in the room behind the throne room.
Notes:

Grand Olympiad - The format of fighting at the Grand Olympiad. All professions are divided into class groups, in which the selection of the opponent will be according to the class group.

Skills that do not reset cooldown when a character teleports to the Grand Olympiad Arena:
All hero weapons are now equivalent to S-grade weapons at +8. Example:

The standard requirements were removed, now only the 3rd profession is needed to participate, you can also participate in sub-classes. New scoring system: +1 for a victory and does not remove anything if it is lost.

Description: The main stats are higher than those of regular epic jewelry.
In addition to improved characteristics, "Blessed Earring of Orfen" has an Active Ability: Fully recovers HP / MP.

Description: You can enchant Regular and Blessed Epic Jewelry only with these enchant scrolls. In case of unsuccessful enchanting of Epic Jewelry, the enchant value is reset to +3.

Artifact of Destruction
Description: Gives the owner additional characteristics and effects. From level 3, they have a visual effect. You can purchase and upgrade from NPC "Mirabel (Evilax Shop)".

Cloak
Description: This is primarily an opportunity to complement the visual style of the character, in addition to increasing the max. CP / HP. You can purchase and exchange from the NPC "Mirabel (Evilax Shop)".

Tattoo
Description: This is part of the ammunition that can be put on and at the same time get a small increase to one of the character's parameters. In total, there are 9 types of tattoos that increase certain parameters; each of them can be upgraded to level 5. You can buy and upgrade the tattoo in the ammunition store from the NPC "Casey (Armor Trader)".

Faction Portal
Description: Used to summon a portal through which allies can come to the rescue in battles. In case the character was killed within the radius of the portal, the opportunity will be offered to respawned near it.

Noblesse Letter
Description: After using this item, the character will receive the status of a Noblesse. Since the buff does not disappear after the death of the character, the skill "Noblesse Blessing" has been changed, and now it adds 8% to damage during PvP. The item can be purchased from the NPC "Harold Bruce (PC Point Shop)" when the 2nd level of the store is reached or from "Estella (Hunter Shop)" for GB Coin's.

Stable Enchant Scroll
Description: In case of unsuccessful enchanting, the item retains the degree of its enchantment. Has C-S Grade and armor / weapon type.

The topic contains an amateur translation. If you can suggest improvements to the text, write me a message in private.